In my last blog post I pointed out that the scientific practice of animal testing for medical science is a wasteful and inaccurate testing process due to the fact that only 5-25% animals tests have the same results when replicated in humans.

I have previously discussed the ethical dilemmas behind animal testing and suggested that a lot of animal testing could be avoided by scientists sharing their data and using information from past studies.

But what can scientists do to avoid animal testing in the meantime, or if they are commencing ground-breaking research that has never been done before?

Well, luckily we live in the 21st century, with technological innovations being produced almost every day (or so it seems).

Scientists have developed a new type of human tissue replication, one that uses real human cells that have not been genetically altered or manipulated in any way. This recent invention is colloquially known as the “organ-on-a-chip”, though is technically called the “microfluidic cell culture” by the scientists who utilise it (I think that I will stick to calling it the organ-on-a-chip because it is less of a mouthful).

Basically, human cells from a target organ are extracted from a living donor, with little or no risk to the donor. The cells are then implanted onto a chip, with a cellular matrix, including real human blood cells and gas exchange. The chip becomes a micro-organ, that functions like the real thing and responds to treatments like the actual organ would. 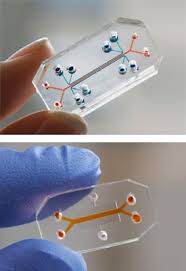 As you can see above, the chips are quite small. The top chip holds a micro-lung and the chip on the bottom holds a micro-peristaltic gut.

So, what are the benefits of these chips? They are very cheap to produce, while animal studies are very expensive to produce. They give accurate responses for that particular model, as opposed to animal studies which, more often than not, are not applicable to human models.

The downside to the “organs-on-a-chip” is that separating an organ from an complete system does not allow scientists to accurately examine the entire physiological response to a drug. There are many examples in pharmacology of drugs that are helpful to one organ, yet detrimental to other organs, leading to health complications. Scientists in Japan have taken a step towards a whole-human-on-a-chip, producing a chip that simultaneously tests liver, intestine and breast cancer cells respond to cancer drugs.

Very soon, it seems, the organ-on-a-chip will be perfected as a sound way to conduct human trials, without the need for animal testing, a huge deal of money or causing harm to real people in medical trials. That should please all sides of the debate!

One thought on “Animal Testing: The Alternatives”